That moment when reality closes down upon you with the full weight of truth bringing you kicking and screaming in line with it. Unwilling, unbelieving, undeniable.  I had been under the false belief that my body fat percent wasn't that bad. That sure I am obese, but I'm functional. I do a very labor intensive job, get praised for carrying it out with professionalism, speed, a high level of customer service.  Somehow I had tricked myself into the belief that my body fat percent was around 30. Not good, but not as bad as 'fill in the blank whatever is worse than being obese above 30% body fat'. 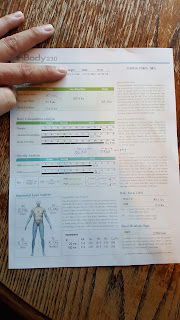 Sunday wondering what the percentage was brought my curiosity to a local YMCA. Inquiring inside revealed that for 15$ one could get a body composition test done. Feeling good about it I made the payment and proceeded to the test. Led into a room there was the machine. Much like a scale, it had metal pads to stand on barefoot, and arms that also had conductive pads. I stood on it, entered the required info: male, age, height.  From there a slight tingling in the soles of the feet as the machine did its work. A few minutes later it spits out a printout with the results. From there the fitness employee explained the results, talked a bit about nutrition, gave some guidelines to use the results to my best advantage.

I dread the thought of what this page would have said just a short 7 or 8 months ago. Prior to my current work, I had been pretty much sedentary at work and home. My metal states where pretty piss poor, and physically was heavy and pathetic. Weighing in at 370 ish I do not know how I managed the pre employment physical screen in which various physical activities had to be done to show your ability to do the job. It was based on heart rate maximums with rests between the activities. Two weeks ago after working the current job all summer into autumn my weight had come down from 370 to 335. With some improvements in general health, and mentally.

I had come down over the last two weeks from 335 to 323 sunday morning, fasted in boxers. At the test the weight was 325. The one good thing that the test showed was I'm set on lean body mass for my age/height/ appropriate or goal weight. Just need to not lose any of that in the process.  The bad part was that it showed i had a body fat % of over 38%. ugh, reality. Just lost 12 pounds..after losing 35...

Such a punch to the gut, taking the wind out of me for a short time as all the thoughts of the journey this year swirled through my minds eye. Several things eventually became clear. I must continue this journey through to the point where it is no longer about hitting a goal. Where maintenance becomes a reality at the legitimate body fat to lean mass ratio.  That my forever lifestyle must be one that includes a real and permanent change in eating habits, dietary food choices. Fortunately that process has been underway since 2011, no matter how half hassed/hearted. The knowledge is there, the motivations in place, its not going unheeded. If anything it is just being implemented slower than it should as pieces of the puzzle of me, my best woe come into place.

I have great hope as to this information helps to spur me on to the place, places, and lifestyle I am meant to live in.  So for the second week in a row as I return to work with a cooler full of fat, fatty foods, and my ketone supplement. (Keto Os) 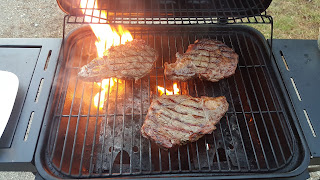 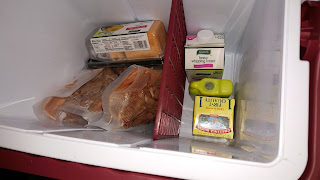 Posted by Mekunga at 8:37 PM No comments:

Nearly two weeks have gone by since i started taking exo ketones. One full week of zero carb way of eating.  On Wednesday I had my first and so far only hiccup. Now normally that would mean a slip of the diet or some bull about not working out or whatever lame thing that has been used to sidetrack my progress.  Since zero carb is exactly that zero carbs, which means more fat, I had some gastric distress. The day started like all of my days this week. Woke up got dressed mixed up the exo ketones in water. Started work at the delivery for the day. The day before I had pushed my fat intake up to 800 calories.  My goal is to have 75-80% of my cals from fat.  So at this stop it had been a few hours since my exoketones, and was hungry.  I decided to drink some heavy cream quickly for fuel before unloading the trailer.  Seems that it was a bit much since shortly after found myself in the bathroom with an unhappy stomach. Other than that one day everything has been good. Ive been taking zma at night, some potassium in the morning and salt as needed in the middle of the day.

I labeled this post Walking Dead. That is how glucose living make humans operate. Sugar spike, insulin spike, hunger spike, craving, sugar spike....on and on and on. We are left with no soul no life no control on our emotions. Can no longer think critically about anything in our lives as we go from spike to spike to spike ever needing another fix to feel sane.  Ketosis, ketogenic ways of eating can even you out. It can level your blood sugars without losing the energy that you need to exist. The trouble with it is it can take weeks or longer to adapt to a way of eating with fat as the main component.  The time spent researching lchf, zc, ketogenic woe's informed me about the possibilities of a better way. A way that we've never been told about, and goes against the pop religion of nutrition. Going onto a keto woe the old cico model of calories in calories out doesnt hold up. Many times I've seen reports from people self studying with high calorie ketogenic diets of 5000 calories per day and they lean out, not gaining at all.

As a population we have a long way to go to find health. Some people will not find keto to be best for them. Some will have genetic issues, or health issues that will force them to find the diet that is appropriate and healthy for them. For myself it has been a long time coming. Ive tried a wide variety of dietary approaches, from vegetable based, fruit based, meal replacement shakes etc. While many work short term they never seem to be sustainable do to one major flaw. Overly restricting calories to the point of starvation or near starvation.  Secondarily they tend to lack variety or lack nutritional requirements for long term use.  The thing that keto does for me is it actually has caused me to go into a calorie deficit several days a week. Compared to a normal day on a s.a.d. (standard american diet) I am eating probably between 1000 and 2000 calories less. I no longer eat every few hours uncontrolled trying to stop the rollercoaster of car and sugar. I'm eating sometimes once a day, without hunger.

For my situation I know that the keto os is what is allowing me to get through the adaptation phase of the ketogenic diet.  Very soon my body will have fully adapted to burning fat for fuel. At that point with or without the supplement I will be in ketosis as long as my fat to protein ratio remains 75/25 to 80/20.  When I lean out to what my body decides is my appropriate composition, the supplementation can be used as maintenance, or to allow for life. By then my choices, and habits will have been changed, the way of eating will be ingrained without thought.  No more walking dead through life looking for that next spike, no more riding the rollercoaster. Life is for the living, not the dead. I will, and now do live.
Posted by Mekunga at 4:43 AM No comments: